"Hermeneutics concerns the problem of interpretation and communication. How can I ever know that my interpretation of your utterances are right and that I have correctly understood what you mean? Neural hermeneutics concerns the attempt to uncover the neural mechanisms that make this understanding possible. The first important insight is that inferring states in other minds is little different in principle from inferring states in the physical world. Both processes rely on predictive coding: we iteratively, and largely unconsciously, test prior hypotheses through creating and collecting new evidence. Once our prediction error is sufficiently small then understanding has been obtained. A special advantage, associated with interpersonal communication, is that, when I am trying to understand you, you are also trying to understand me. The second important insight is that understanding can be achieved more quickly when our predictive mechanisms are more similar to each other. I shall review the evidence that people automatically align themselves with others, in terms of experience, action, knowledge and beliefs. These alignments enhance pro-social behaviour in general and communication in particular. Finally I shall give an example of how hermeneutics can enhance communication and performance in a simple joint action task."

Chris Frith is Emeritus Professor of Neuropsychology at the Wellcome Centre for Neuroimaging at UCL, a fellow of All Souls College, Oxford, and Visiting Professor at the Interacting Minds Centre at Aarhus University, Denmark. Since completing his PhD in 1969 he has been funded by the Medical Research Council and the Wellcome Trust to study the relationship between the mind and the brain. He is a pioneer in the application of brain imaging to the study of mental processes. He has contributed more than 400 papers to scientific journals and is known especially for his work on agency, social cognition, and understanding the minds of people with mental disorders such as schizophrenia. For this work he was elected a Fellow of the Royal Society in 2000 and a Fellow of the British Academy in 2008. His last book, Making up the Mind: How the Brain Creates our Mental World (Wiley-Blackwell 2007), was long-listed for the Royal Society Prize for Science Books, 2008 and received the 2008 Book Award from the British Psychological Society. 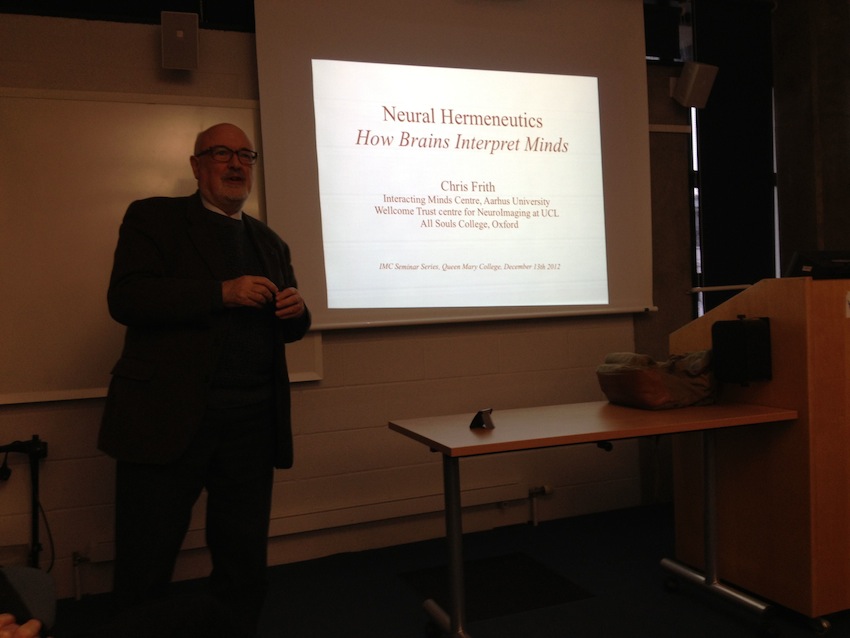 Back to IMC Seminar Series