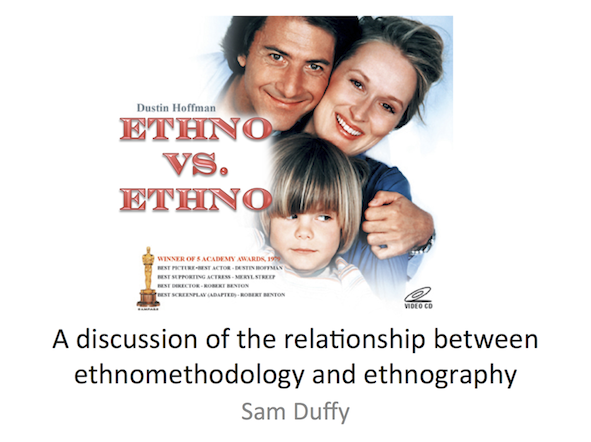 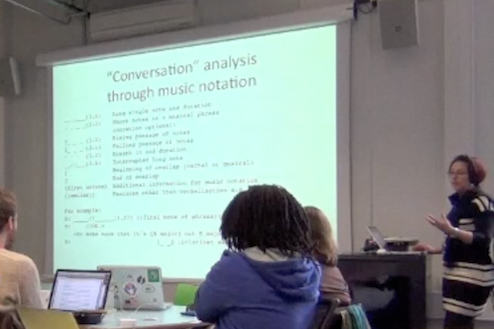 These were the questions posed at the end of the introductory talk when the discussion was opened to the floor.

Q: How do you stop Ethnography becoming a fishing exercise for your own agenda? So I have a theory, I want to design something, so I look for stuff that already aligns with what I want to find.

A: It is a fishing exercise, ethnography is hard because you don’t know necessarily what you are going to find. You don’t approach with a preformed view, so it is hard to know when to stop looking. Contrast with quantitative methods where you are specifically testing a hypothesis.

Q: So is it valid to say that ethnography is going out and doing the work and ethnomethodology is a way of doing that work …errr……?

A: Garfinkel et al are looking at the construction of meaning. What you are doing as you go about your daily life is agreeing with other people about what you are experiencing, your processes actually mean. There is constant negotiation about process. E.g. catching a fish, the fish catching processes. You could do ethnography but it isn’t ethnomethodology until you see how the people catching the fish are negotiating the process.

Q: So you think it’s involvement of the people negotiating how to do the fish catching that makes it ethnomethodology?

Q: So if you had two groups of people and one group observed the process and then wrote up ‘how to catch a fish’ and the other group went and watched the people catching the fish and wrote about how they went about catching the fish, are you saying this is an ethnomethodological view?

A: Yes Garfinkel’s original work was done in medical institutions (which was debated – was it actually Sacks, or both?)

Q: I am a bit confused by the question, what is the difference between ethnomethodology and ethnography. It seems obvious to me that maybe its simple, and that ethnography is the study of groups with a very wide range of different methodologies. Ethnomethodology is about studying how groups do things, the methods the groups themselves use to accomplish their ‘groupness’. So it’s a very straightforward distinction. What is more contentious and more interesting to flesh out is the difference between various different sects or approaches. Ethnomethodology has a church, lineage, it has different groups that fight within it. Ethnography is a really broad set of different approaches, like geography, it’s massive, there’s human geography, there’s….

A: No, not a subset….. I still say that the question of one versus the other is a category area

Q: I am not saying that it is one or the other at all, I am taking a Venn diagram approach, saying I believe that the branch of ethnography that I am doing is ethnomethodologically influenced, but I am not quite sure why, because I am not clear on what the definition of ethnomethodology is. Is one specifically a technique, and the other something else, which I can’t define?

A: the phenomenon that you are looking at is the methods by which the group you are studying accomplishes this group activity, it’s a method of groupness rather than it’s relevance in a historical or literary context

A: there are a lot of people who study one-to-one music tuition looking at learning theory, teaching methods, how long they practice for or play scales. That is different to what I am doing

Q:Is it the looking at how the student and tutor do it [have a lesson] that makes it ethnomethodology?

A: Hutchins does ethnography because the data collection is ethnographic, but he doesn’t analyse it in the way that Ethnomethodologists would. He goes and flies planes (Hutchins, E. 1995) ..(couldn’t hear the rest). Ethnomethodologists must be using observations of members’ own understanding of what is going on. So if they don’t do that…you can’t do it in an armchair in a….

Q: you could do theoretical ethnomethodology….

A: that would be wrong!

Ethnography doesn’t always have to be Ethnomethodology but ethnomethodology is difficult without ethnography. Ethnomethodology is about public and meaning – the analysis has to include people’s own understanding of what they are doing. For example Heath and Luff, they look for situations where something becomes, goes from private to being made public, for example looking at a timetable in a London underground control room (Heath, C., & Luff, P. ,1991) . It’s almost like a pragmatic reason for why meaning and ‘groupiness’ and collaboration matter. That’s how you get to see what is going on.

Q: So does that mean that ethnomethodology has to always look at groups, or can you have an ethnomethodological view of the activities of a single person?

A: In principle you ought to be able to do it but you are also meant to have a member’s own understanding of what they are doing. Their own rationalization of what they do has to be seen in their conduct. Hard to do for a single person on their own. Something about the conduct of the people in the setting overturns their sensitivities

A: Ethnomethodology is stuff that is negotiated (asked for clarification). Catching a cold from someone isn’t negotiated!

Q: So ethnomethodology is looking at collaborative tasks then?

Q; What else could you do to investigate the process?

A: there are people who have filmed lessons, and then done interviews with the participants, watching the film with them and asking them about what is happening. I am not really sure how useful that is! Doesn’t sound like either to me.

Q: during my remote music tuition internship when we tested remote lessons via video conference (Duffy, S., Williams, D., Stevens, T., Kegel, I., Jansen, J., Cesar, P., & Healey, P. G. T. 2012) there were lots of technologists observing the tests and looking at things like bandwidth, packet loss etc but I was looking at what the people were doing and so had some very different findings. I analysed what they were doing afterwards with a synchronised view of each room and could see the effects of delays that observers in the separate room couldn’t. Makes me thing that design definitively benefits from this different way of looking at things, you need the other stuff, but you also need to know what people actually do.

Q: Is it linked to participatory design? They are kind of participating, you are using their practice.

A: Yes, ethnography could be a form of participatory design but a lot of what is happening isn’t what people would call ‘PD’

Q: No, not participatory design. Sam, are you basing your possible design on observation alone or what people tell you, views of participants?

A: As part of fieldwork I can’t help talking to people so I do get their views but people don’t always know how they do things. It’s easy to say what you think might work but it isn’t so easy to say what you do. They might think they know what they want but they might be wrong. So I am trying to keep my design based purely on what I see/observe in the lesson. I try not to let their beliefs about what they think is happening influence it.

A: There is a tradition in participatory Design that the users are involved.

A: then ethnography isn’t participatory design, which includes the input of the participants.

Q: Does analysis or subsequent designs change the nature of the engagement? Change the frame?

A: No – what you do subsequent to observation doesn’t change what you did before.

Q: If I gathered the same data in the same way that you would and analysed it, would I get the same results as you?

A: No, lessons are around an hour. There are so many things that you might see and want to investigate, in that volume of data it is unlikely that you would get the same findings as me? Not everything that comes out of it will be useful, it is important to analyse the right aspect if you have a design in mind.

Q: Is that a problem? Even if I ‘was you’ for the data gathering I have my own frame?

A: Isn’t this more about phenomenology? I think there are phenomenological ethnographers!

Q: does it matter what you do with the data afterwards? Does this change whether you are taking an Ethnomethodological perspective or not? Could you take data that hadn’t been analysed in this way and subsequently do an ethnomethodological analysis?